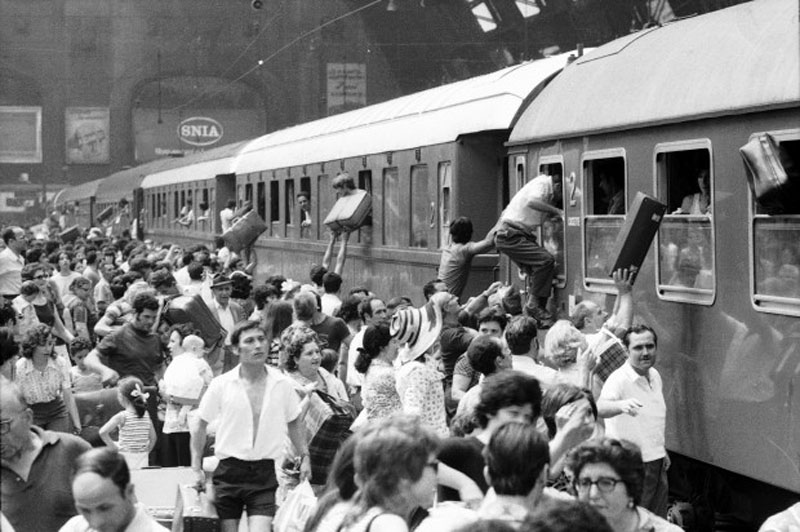 Have you ever visited an Italian medium-big city between the second and the third week of August? Well, if you did, you probably know exactly what I am talking about: the shops and the restaurants are closed, the streets are empty and silent, only a few people wander around running their errands in a state of lazy relaxation.

It does not apply to very touristic cities as Rome, Florence or Venice of course, where visitors are storming around all over the place. But even in such cities, if you leave the centrum for a while, you will have that experience: it’s Ferragosto, baby!

The word Ferragosto descends from the Latin phrase Feriae Augusti (rest of Augustus) indicating a holiday established by the emperor Augustus in 18 BC. It was added to the already existing festivities falling in the same month, such as the Vinalia rustica, the Nemoralia and, most important, the Consualia. The Consualia was a period of rest and celebrations that celebrated the end of agricultural work, dedicated to Conso, the god of the earth and of the fertility.

The ancient Ferragosto was intended to connect the main August holidays in order to provide to the farmers and workers a good period of rest – also called Augustali – extremely important to them after the great efforts made during the previous weeks. During the Roman Era, the festivity was actually on 1 August. Later, the catholic church decided to make coincide the secular anniversary with the religious celebration of the Assumption of Mary: 15 August.

The popular tradition of “la gita di Ferragosto” (the Ferragosto trip) was born during the fascist period (in the mid twenties of the twentieth century) when, in the Ferragosto period, the regime arranged hundreds of popular trips for citizens and workers.  This was promoted by the institution of the special popular trains, with only third class, with heavily discounted prices.

– “Vado a una grigliata” (a barbecue): people gather together and barbecue for the all day.

– “Vado da… + nome di un amico/parente” (I am going at…+ name of a friend/relative): people often visit friends of relatives on Ferragosto and have a festive (and massive) lunch or a barbecue together.

– “Vado a… nome di una localita’ di mare/collina/montagna” (I will go to + name of a nice sea/hill/mountain place).

The only absolute must at Ferragosto is however: it’s time to leave the city.