Meet 'las empollonas', some of our most loyal Spanish students 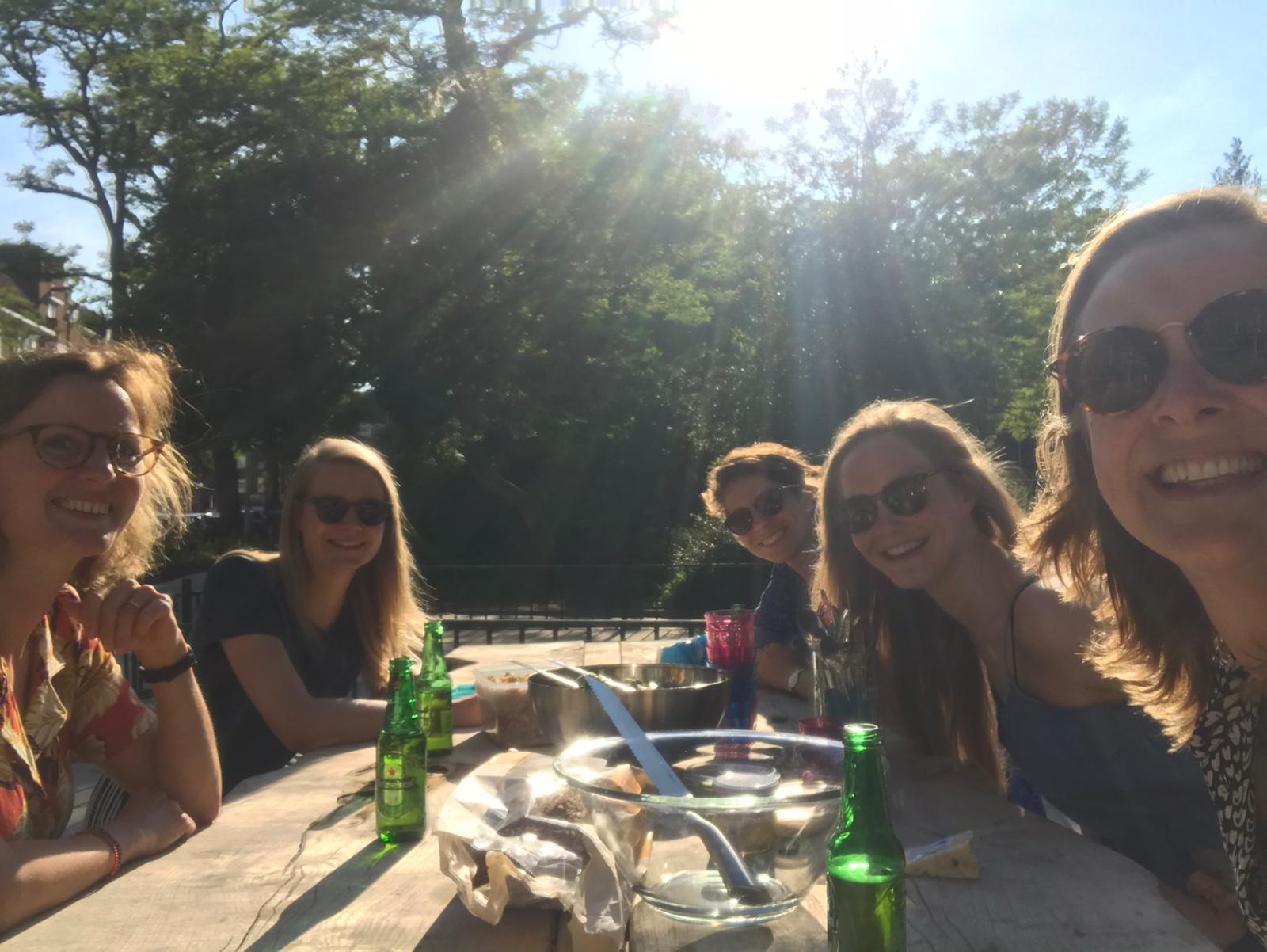 Meet ‘las empollonas’, some of our most loyal Spanish students

Floor, Sterre and Marieke started learning Spanish at Taalhuis Amsterdam years ago – Floor’s first course was even back in 2015. You might call them animales de costumbre, as they have always been following their courses on Tuesdays at 19:00 with Alberto as their teacher. But the name this C1 group* uses to refer to themselves is las empollonas, ‘nerds’ in Spanish. Because however they like talking and playing games during the lessons, they also enjoy asking the most difficult grammar questions.

After one of their lessons, we sat down with them and their teacher Alberto, and spoke about learning Spanish at Taalhuis, becoming a group of friends and their best memories.

Why did you start learning Spanish?
Floor: My partner and I were on holiday in South America with another couple, and they spoke Spanish fluently. So after that we made the deal that the next time we would go there, at least one of us would have to speak Spanish fluently as well. Later, after booking a flight to Argentina, my partner said: do you remember our deal? So we signed up for a five-week summer course together, and after that I continued at Taalhuis. The cousin of my partner was already following a course with Alberto.
Marieke: After high school I went to Granada for six months, and then I had some lessons at the university in the Netherlands as well. But after my studies I thought it was a pity that a lot of my knowledge had faded. I got introduced to Taalhuis by a friend of mine, who happened to be the same cousin of Floor’s partner. That was just a big coincidence. Just like both our mothers turned out to come from the same village in Brabant, haha.
Sterre: I went to Salamanca to learn Spanish after high school, and years later I thought it would be fun to pick it up again. My partner is half-Spanish, and his grandmother only speaks Spanish. And I wanted to be able to say something more than: erm, gracias! Now we sometimes have a Skype conversation with her, and I only have to say one word in Spanish to make her very enthusiastic.

What do you like about learning Spanish with this group?
Sterre: It’s very relaxed, there is no pressure. But we also take it very seriously ourselves – there is a reason we’re the empollonas.
Alberto: Nos reímos mucho, pero a la vez, hay trabajo. Y por eso son las empollonas.
Floor: It helps that you know each other quite well after a certain time, and many students stayed for at least a couple of courses. And we also have the same rhythm and goals: we don’t need to speak Spanish right away because we’re about to live abroad, but just want to learn it in a relaxed way – and also seriously, indeed.
Sterre: We always talk a lot in class. Today it took 15 to 30 minutes before Alberto could start, haha.
Floor: And we have been playing a lot of games. At the summer course we played bingo to learn the number for example, a lot more fun than just learning them from scratch. And do you remember when we had to dress up and go to the other room?
Sterre: Yes! We had to create a painting-like situation, then take a photo and go to the other room. In the meantime some details were changed, and we had to guess what exactly – like a pair of glasses missing.
Marieke: Meanwhile we were actually practicing grammar.
Sterre: And we played Scrabble, memory games, Kahoot…

What are the biggest changes you’ve seen at Taalhuis since the moment you started?
Sterre: It has become bigger, I think.
Floor: Maybe it’s also because the first lessons were at this location with room for just one group [Sint Nicolaasstraat 59]. The groups are still small though.
Sterre: We once had a group with 7, 8 people, but that was the maximum.
Floor: We always had Alberto, always on the same time on Tuesday. We are gewoontedieren. Animales de costumbre.
Sterre: I’m not sure if I would continue if this group would split up, or if Alberto would stop.
Marieke: Me too. Sometimes you’re very busy and you think: where do I get the energy from to be focused for another one and a half hours? But then you drag yourself through it and actually leave the class with a lot more energy. I think that’s very valuable, we learn a lot but we also have fun.

Do you, as experienced Taalhuis students, have some tips for people who are just starting to learn a new language?
Marieke: Watch Spanish series!
Sterre: With Spanish subtitles.
Floor: Yeah, that’s an important detail. However, when I don’t know a certain word I rewind sometimes, and then I switch to Dutch for a moment.
Marieke: Really? So much effort.
All together: Empollonas!
Sterre: But sometimes you do want to know what some words mean, especially when you hear them frequently.
Alberto: Like pinche.
Floor: Just watch Narcos Mexico and you’ll understand. They say pinche all the time.
Marieke: Alberto, does pinche have both a masculine and feminine form?
Alberto: No, but you’ll have to add an S when it’s plural: los pinches perros.
Floor: Good to know!
Sterre: And we always read a book. Like Isabel Allende’s Cuentos de Eva Luna, and Manuel Rivas’ ¿Qué me quieres, amor? And now we’re reading the book of Alberto’s father. It hasn’t been published yet, so we’re actually proofreading it. Alberto’s father also visited one of our classes once, he was very proud of his son.

You’ve been together quite a while. Do you often see each other outside of the classroom?
Sterre: Yes. We had classes on a boat and in the park, and picnicked on the streets. And they’ve been to my birthday.
Marieke: We went to the Spanish Film Festival. And to the intercambios, of course. Are we missing something?
Alberto: We’ve been to the bar as well?
Sterre: Even to a bar in Medellín! When I was in Colombia, Alberto was there as well, so we had a beer together. Very gezellig. But indeed, I see you more often than some of my friends. Some of my other friends, I mean.
Floor: We know quite a lot from each other. Including Alberto, haha.
Alberto: After all these years, for me it feels more like we are a grupo de amigas. But more generally speaking: the books that we use have a lot of assignments in which you have to tell something about yourself. I don’t think you can ask that from students without being willing to set an example yourself.

It also has to do with creating a safe environment, where you’re not afraid to make mistakes. Right?
Sterre: Yes, and it’s important to be able to make mistakes. Like when Marieke said sin ropa, remember?
Marieke: One time I told in class that I had been bouldering on the weekend, and that it’s a form of climbing without the use of ropes. So I said: sin ropa. But ropa actually means clothes, so they thought that was quite funny.
Floor: Everybody was like: ¿Sí, sin ropa? And you kept on saying: ¡Sí, sin ropa! Haha.
Sterre: How many times Alberto must have laughed about the things we have been saying.
Marieke: Now I know the right word is cuerda, and I will never forget it.
Floor: So this is how it usually goes, for one and a half hours.
Sterre: This feels like an extended class, really.

You’re in C1.2. What’s next?
Floor: DELE, of course!
Marieke: Yes, is that our plan?
Sterre: For me not really.
Floor: No.
Marieke: I don’t need to do the DELE exams right now either, I would like to simply continue with what we’re doing now.
Sterre: Yeah, what should we do after this? Just start all over from A1?
Alberto: We can always continue with a conversation group. Or a clase de juegos.
Sterre: Before us, there wasn’t any C level at all for Spanish at Taalhuis. We kind of created it ourselves.
Floor: Just like unlocking a new level in a video game.
Marieke: We have beaten all the eindbazen.

*Las empollonas actually have a fourth member as well (Renske), but she isn’t following a course at the moment.