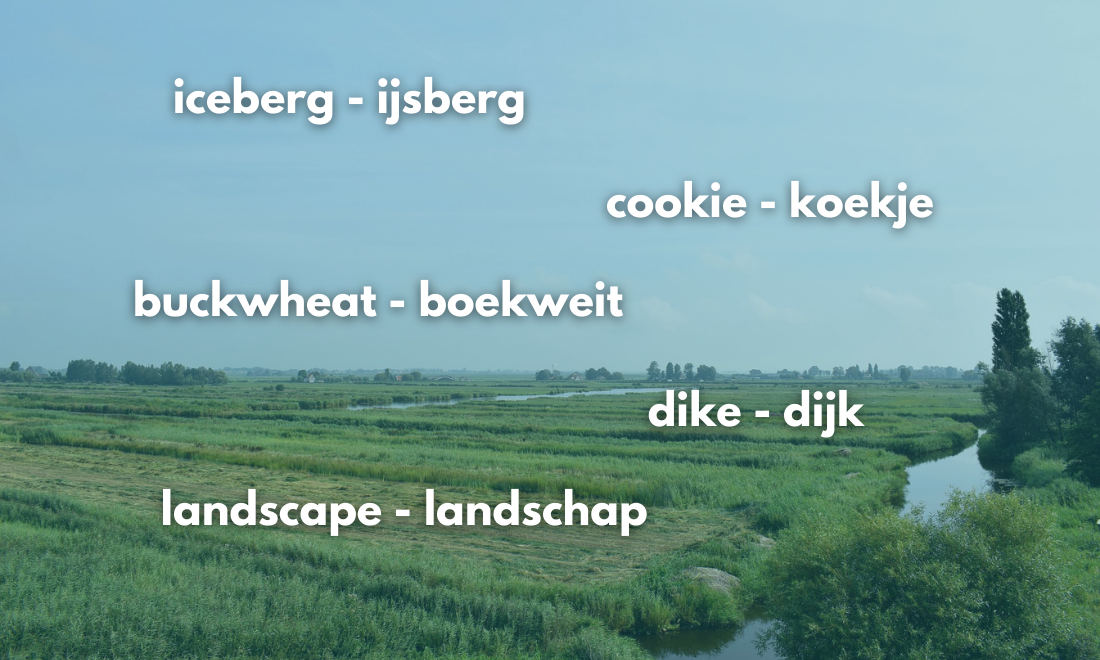 Did you know the word ‘cookie’ has Dutch roots? It originates from koekje. ‘Cookie’ is mainly used in the United States, while British people would rather say ‘biscuit’ (which in turn is related to the Dutch word beschuit, better known as rusk in the Anglophone world).

And that’s just the tip of the iceberg (ijsberg). The Oxford dictionary has more than 1500 words that come from Dutch, and some of them make a lot of sense right away (like ‘dike’, from dijk), but others might be a bit more surprising (like ‘trigger’, from the word trekken, meaning ‘to pull’). (Or ‘geek’ from the word gek, which means ‘crazy’, and ‘furlough’ from verlof.)

So what kinds of words are we talking about, and what are their stories?

First, there is definitely something about booze. The word ‘booze’ itself comes from the Middle Dutch buse, which means ‘drinking vessel’ and was used to refer to drunk people. Some alcoholic beverages themselves have their roots in the Netherlands as well, like beer (from bier). Both the Netherlands and Belgium had a big influence in England in the Middle Ages, with many Flemish and Dutch settling in this country. Among other things, they introduced a beer preparation method using hops (which is also a loanword in itself by the way: hop). Brandy comes from brandewijn: while branden mostly means ‘to burn’, it also has been used as a synonym for destillization – so brandewijn literally means ‘distilled wine’. And just as children are sometimes named after their ancestors, you can tell from the word ‘gin’ that the Dutch jenever was his grandfather.

There is more food: think of the waffles (wafels) you’re making with buckwheat (boekweit) flour, gherkin (augurken) and coleslaw (koolsla). There is also a theory that the name of a typical Scottish product has Dutch roots: the word scone is thought to be shortened from schoon brood, meaning ‘fine bread’ in Old Dutch.

After Flemish monks started to drain the wet East Anglia, followed by Dutch engineers in the seventeenth century, the English language was enriched with many water related words such as sluice (sluis), canal (kanaal), dike (dijk) and morass (moeras). And indeed, quite some English words with Dutch roots have to do with shipping in particular. Yacht comes from the early Dutch jaghte, from jaghtschipp (literally: a ship for hunting), and in the Netherlands, kruisen referred to ships crossing over the water – and not only the verb ‘to cross’ but also cruise ships owe their name to this. And keelhauling, a form of punishment once meted out to sailors at sea, comes from the Dutch word kielhalen. The kiel is the bottom-most longitudinal structural element on a vessel, so this punishment meant that the sailor was tied to a line looped beneath the vessel, thrown overboard on one side of the ship and dragged to the other under the ship’s keel. Kielhalen.

Stillevens, Brooklyn and the Wallen

The Dutch art from the 17th century has also left many traces in the English language. Whether Rembrandt van Rijn was making a still life (stilleven) on his easel (ezel), or a landscape (landschap) or just a sketch (schets) for his etching (etsen) piece, sooner or later it surely would become a masterpiece (meesterstuk).

In 1625, Dutch settlers founded Nieuw-Amsterdam as the capital of Nieuw-Nederland, in the modern-day United States. In the same century, the English took over and renamed it New York City, but a lot of place names kept their Dutch names. Think of Brooklyn and Harlem, named after Breukelen and Haarlem in the Netherlands, but also Coney Island (after Konijneneiland, which means ‘rabbit island’), Broadway (after Breede Wegh, ‘broad road’ in Old Dutch), Rhode Island (after Roodt eylandt, ‘red island’) and Staten Island (after Staten Generaal).

Besides that, Wall Street was named after the city wall around Nieuw-Amsterdam. In Dutch, a wal isn’t just a wall but a rampart, so it was simply called the Walstraat. This is the reason why the Red Light District in Amsterdam is also known as ‘de Wallen’ – this area was created after Amsterdam expanded its fortifications with new canals with ramparts around 1385: the Nieuwezijds Achterburgwal (now Spuistraat) and Oudezijds Achterburgwal. At a later stage the word took on a more specific meaning: ‘fortification of a waterfront’, and by extension it simply became waterfront or bank, as a synonym for oever.

Of course, the spread of Dutch words hasn’t been a one-way street. The word mannequin – a model to display clothes – came into the English language via French, but originates from the Dutch manneken, meaning ‘little man’. (Perhaps you know the famous Manneken Pis statue in Brussels?) But the word mannequin also made its way back into Dutch, and most Dutch people probably don’t even realize how familiar it is.

This blog was written by Dutch teacher Yoran.