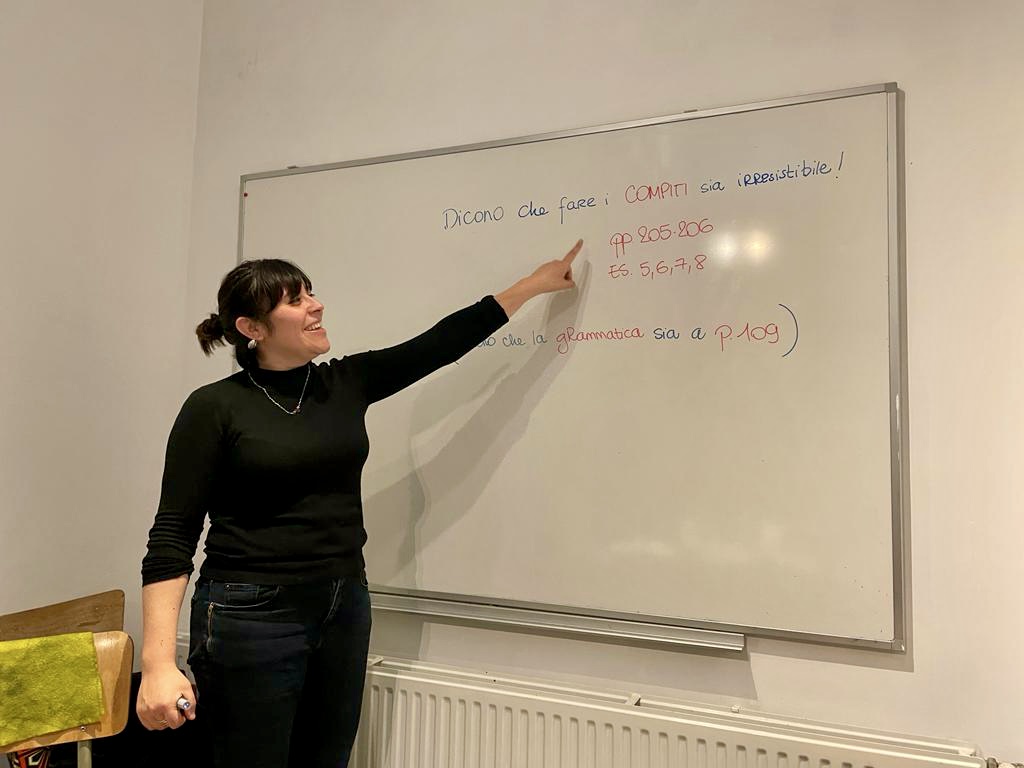 Turning off the lights during listening exercises, inviting her students to interview the author of the course book: for our Italian teacher Francesca Alioto, teaching is a way to spark her creativity. In this interview for our Meet the teacher series, you can read all about how she teaches, what she learns from being a language student herself as well and her urge to secretly record authentic conversations when she’s in Italy.

Hi Francesca! What do you like about language teaching?
It really gives me energy to connect with my students, and take advantage of everything around ourselves. You can use every component of the classroom to create good learning conditions. Using the table for specific role plays, asking students to stand on the chairs, turning off the lights. That’s actually something I like to do during listening exercises.

Turning off the lights? What happens when you do that?
I really like having these dark listening sessions. It’s a funny way to move the focus: the students are not overwhelmed by the difficulty of the listening exercise, but they think: we’re in the dark, what’s going on? The difficulty is not in the listening, but in adapting to the new atmosphere. And that makes it easier to listen fluently.

Speaking of listening exercises: you’ve also been to an Italian opera with one of your groups. Where did this idea come from?
Yes, with a group that started in 2015. There are four students left from the original group of eleven, and they’ve reached C2 level. I feel like I’m their mother in a way – even though they are all older than me, haha. Year by year I see their progress, which I find quite magical as they only speak Italian for two hours in a week.

At one point I decided to get out of the classroom with this group. The first big project was centred on the topic of the mafia, an important topic for me. I’m from Sicily and I really wanted to handle it with care. I’m aware of all the stereotypes and prejudices around it, which I definitely wanted to avoid. One of the students had been in touch with a journalist from Sicily, who was very involved with mafia research, and after I contacted him the students prepared an interview with him via Zoom. They read articles and books and prepared a lot of questions – the session was really nice in the end.

So this year they asked me: what’s next? At the same time one student really wanted to go to the opera, so he proposed to do that together. We had some space left in our program, so in these lessons we studied the text of Giacomo Puccini’s Tosca, and not just the language, but also the music and scenographic aspects. And then we went. They also interviewed Carlo Guastalla, one of the authors of the book we have been using: Nuovo Magari C1/C2. They are not afraid to challenge themselves, which is also motivating for me. This year they asked me to use 100 percent authentic materials, so I let them listen to real podcasts from the radio, tv shows, and newspapers.

I once heard you say that, when you are in Italy, you tend to secretly record real conversations people are having. Did you actually do that once?
Yesterday I used an audio message a friend sent me, haha. We were talking about dialects, and this friend comes from Tuscany, where supposedly the ‘pure’ Italian is spoken. So I let them listen to a short part of this message, and they couldn’t get a word. I really would love to do this more often, if I only had more time to write down all the dialogues – and if it was legal. Sometimes I do it with other teachers though, but then they know in advance.

Does your friend know you used his voice message?
No, haha.

You also once let your students listen to a music band that wasn’t known very well, so they couldn’t possibly find the lyrics online.
Yes, La Rappresentante di Lista. Now they are quite famous actually, so this task wouldn’t work out in the same way. I let them listen to them as homework: the task was to listen to it dozens of times and write down the lyrics. It was an impossible task – their level was B1 at the time, so they really struggled – but after listening a couple of times they started to understand some bits. The goal wasn’t to have them understand 100 percent, but to let them listen to something that’s real and authentic, to stretch their listening skills to the maximum and help them find their own strategies.

Was it hard to motivate them in doing something this hard?
When something is very hard, I always warn my students from the very beginning. I just say: maybe you’re not going to understand anything the first time. But let’s just try and listen, and then again and again, and see how far you get. It was a homework assignment, but they knew how to do it step by step: first listen to it to get a general idea, then focussing on more detailed information. Some of them actually listened to it 50 times, haha. And then they had to write down the lyrics, so it also was a writing and grammar assignment: they had to figure out how to write the words and match sentences in a logical and grammatical correct way. Now they are huge fans of the band.

You have been working at Taalhuis for quite some years now. Where did it all start?
I started teaching Italian as a second language in 2003, to refugees in Palermo as a volunteer. I had no clue how to do it. There were no materials or a method, and I had a very mixed group, with highly educated people and people who didn’t know how to write. So it was hard, but it was also a super nice experience.

In 2013, I did my teacher’s training in Rome. After that I started working at a little language school close to Palermo, but after a while I wanted to explore and develop my professional skills also in other contexts, so I applied for an internship at Studiolingua in Amsterdam [In 2018 Taalhuis Amsterdam took over the activities of Studiolingua]. The plan was to stay in Amsterdam for three months and nine years later I’m still here.

How did you develop yourself as a teacher in all these years?
In 2003 I was quite naive, and now I would say I’m more structured and experienced. And compared with 2013 I’m also more down to earth. I had many enthusiastic ideas, but now I realise you need to balance with reality as well and resize your own position: that I like some material doesn’t automatically mean it’s also good material for students. Language teaching is about the students, about helping them find their own learning strategy. It comes to practice as well: the training I had was very good, but it was just a starting point. There are a lot of things you don’t learn from the books – how to deal with certain situations, how to use the space, etcetera. I also still keep on attending trainings in order to develop myself and my professional skills, to stay up to date and also to refresh my repertoire.

You also have been following language courses at our school yourself: Dutch, Greek and Turkish (aside from the fact that you learned German and some Spanish at university). Did you learn a lot from attending other courses yourself as well?
Definitely. I studied Dutch because I live here, Greek out of passion and now I’m doing Turkish because my boyfriend is half Turkish. I am very shy in a group myself, afraid of making mistakes and saying something stupid, haha. But that does remind me of how students can feel in a group. So attending other classes helps me to understand what works, and to notice when people don’t feel comfortable doing something. And what kind of activities or exercises can be funny and effective. Or challenging, or boring.

Did the courses inspire you for your own classes as well?
Yes, but I don’t copy their activities all the time, haha. It’s also about other things. Last year I was in Isabel’s online Dutch class, for example. Isabel didn’t panic when a microphone wasn’t working or whatsoever – she was so comfortable with using Zoom that it also helped me with my online classes. It really lowered my Zoom stress. I was like: it’s not that hard actually, just look at Isabel! And with Melike I also learned to be more organised – I was horrible with the whiteboard. Looking at each other’s classes is a way to share knowledge. I think every teacher should be a student as well, just to know what it’s like.

Read more interviews with our teachers: 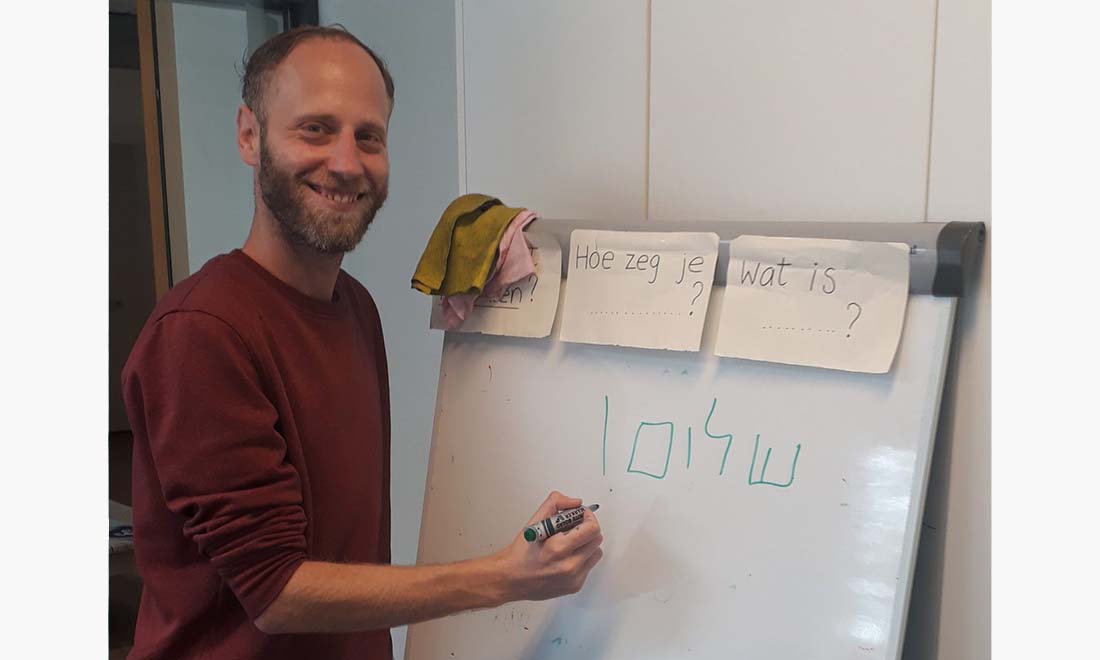