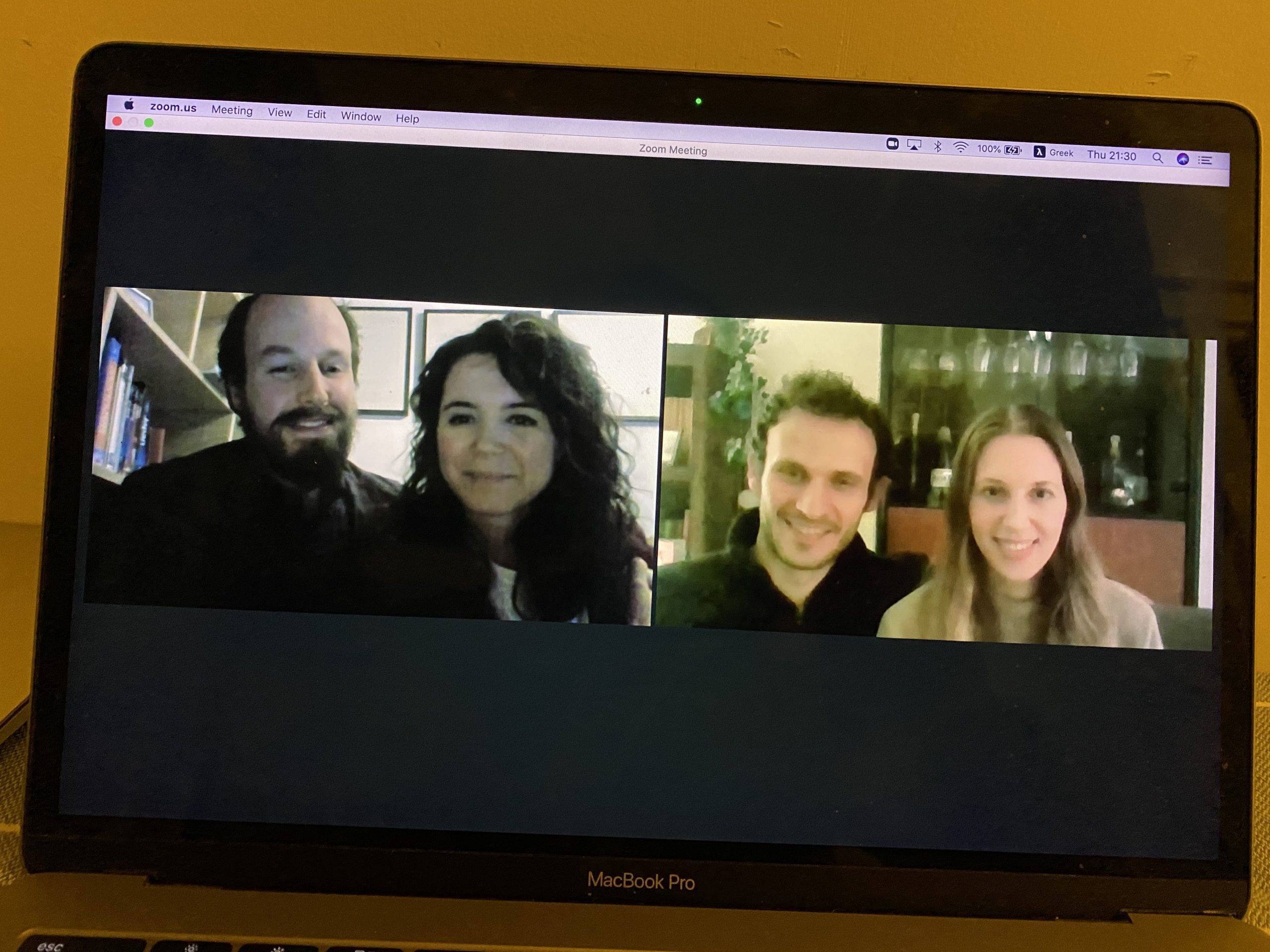 This double couple interview shows how romantic being late for a class can be. When Willemijn was missing two of her Greek students in her Dutch class, it turned out that it was because their partners were running late in Maro’s Greek class!

Because it’s almost Valentijnsdag, μέρα του Αγίου Βαλεντίνου, I’m talking to Simon and Antonia and Kostas and Nicole. Both Greek-Dutch couples, learning each other’s languages, in the same groups!

How did you meet?
Kostas: Nicole and I met in Κωνσταντινούπολη (Istanbul) in Turkey in 2012, where we both did our Erasmus.
Antonia: Simon and I met in Delft, during one of the many graduation parties. Simon was about to go on a sailing trip and there was one empty bed left, so I was invited to join!

Why did you decide to start learning each other’s language?
Antonia: In the beginning, the reasons were mostly practical, things like work et cetera, but at a certain point I wanted to be closer to Simon and his family and I realised that my future lies here, in the Netherlands.
Simon: I wanted to be able to speak to Antonia’s parents and her grandmother. And you can never express yourself in a different language as you can in your own language. So we had to start learning each other’s mother tongue.
Nicole: We regularly visit Greece, and Kostas’ mother speaks English very well, but not everyone in the family does. There are also little nieces and nephews who don’t really understand why I never say anything. The best conversations I have in Greek are with kids by the way!
Kostas: At first practical reasons, but now it’s more about real integration (ενσωμάτωση). And if we have children some day, I want to be able to speak with them in both languages.

Which language do you speak together?
Nicole: It’s becoming more and more of a mix. But since we got to know each other in English, we still speak English together.
Simon: Mostly English, but sometimes we go out for dinner for example and make a nice activity of it. Antonia can only speak in Dutch and I can only speak in Greek. We talk about different subjects because we’re not able talk about everything yet. We have to keep it a bit simple.

Is it different to speak to your geliefde/ αγάπη than to “normal people”?
Kostas: You don’t talk about basic things anymore, so you need a deeper knowledge of the language to be able to speak about all the topics you want. It’s also more difficult to express your deeper emotions (συναισθήματα).

What is your favourite word in each other’s language?
Nicole: το κουκουνάρι (pine nut), because it sounds like ‘koekoek’ and ‘kanarie’! And λουλούδια (flowers).
Kostas: Verloskundige (midwife) and kabouter (dwarf).
Simon: I like how non-Greek words and names end up in Greek. Like Γιόχαν Κροϊφ (Johan Cruijff).
Antonia: I like the word ‘klusjes’. There is no good Greek (μερεμέτια) or English equivalent, so I just use the Dutch word for it all the time!

I was expecting something a bit more romantic…
Well, we mostly have a lot of fun learning each other’s language!

Any cultural or personal eye-openers?
Nicole: Since I understand some Greek I can distinguish a kind of “men language” when Kostas is on the phone with his Greek friends.
Simon: Antonia seems to always be in a fight with her parents. Her father also speaks the dialect of Thessalia, so I don’t understand it when they talk to each other. But I did learn that ‘politeness’ is very different in different cultures. In Greek you can say “water!” to your mother and she will bring a glass of water. I shouldn’t try this at home.
Antonia: Simon says ‘U’ to his grandmother, but ‘hee, jij’ to his professor. In Greece politeness also means distance, I couldn’t imagine saying ‘U’ to my own grandmother.
Kostas: Well… The better Nicole gets, the less I can say about her 🙂 Another eye-opener from learning Dutch:  I see a reflection of the Dutch directness in the language. The structure of the sentences is very short and efficient. And ‘schuld’ has two meanings, maybe this has something to do with Protestantism?
Simon & Nicole: Greek words are so long! And sentences have so many comma’s!

What are you planning to do on Valentine’s day?
Kostas & Nicole: Make a home restaurant.
Simon & Antonia: Babysit a two-year-old, so the parents can have a Valentines weekend.

How long are you going to keep learning each other’s language?
All: Until we’re fluent!

Thank you, Antonia, Simon, Kostas and Nicole for this interview, which was a beautiful mix of Dutch, Greek and a bit of English, but we translated most of it to English for this blog…