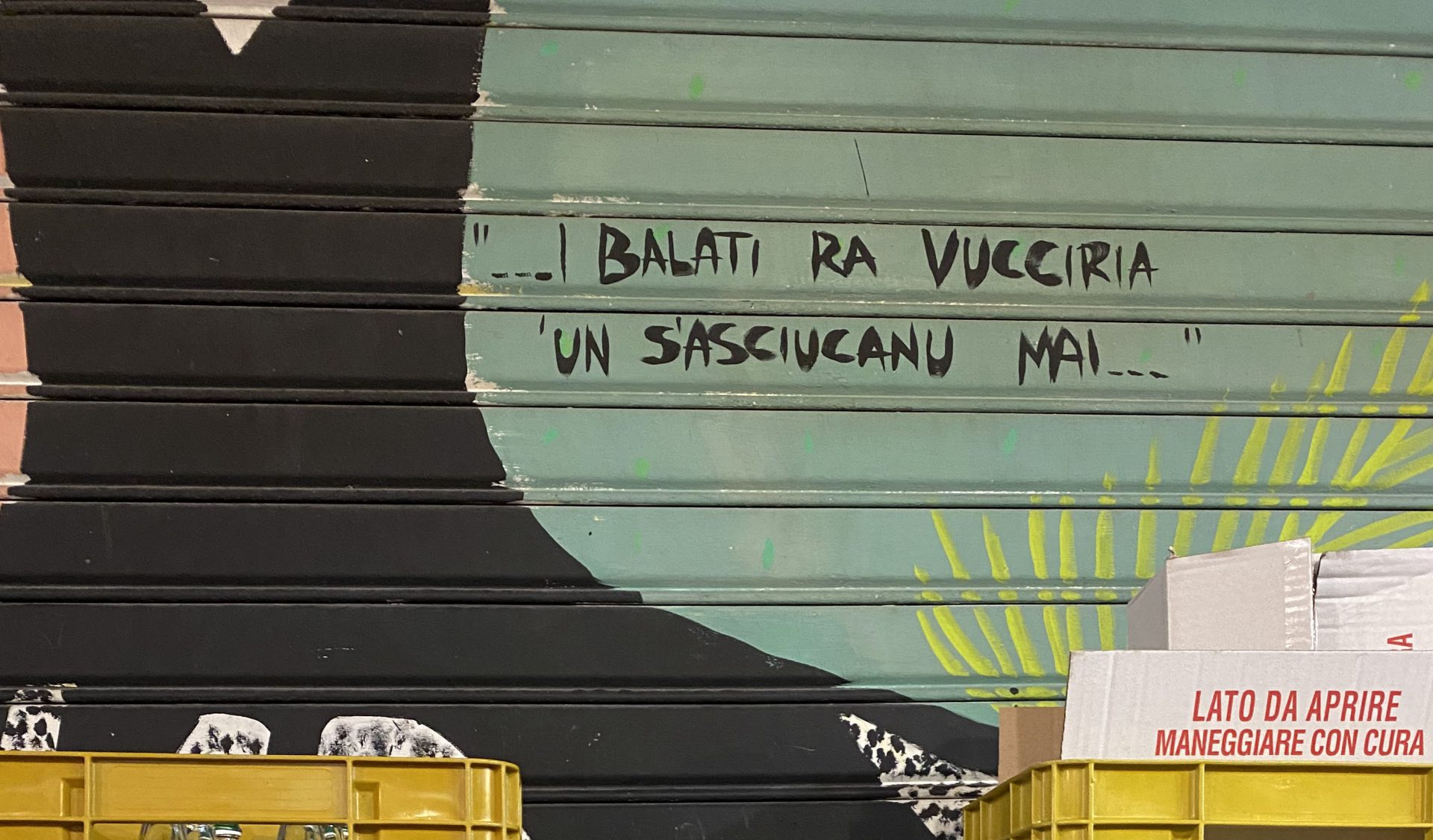 This October Taalhuis went on its first language trip after the lockdown again, with destination Palermo, Sicily!

After a caffè latte (coffee with milk) and cornetto (croissant) at the Caffè Centro Storico our two groups engaged in Italian lessons by the marvellous Marzia and fabulous Fabio. 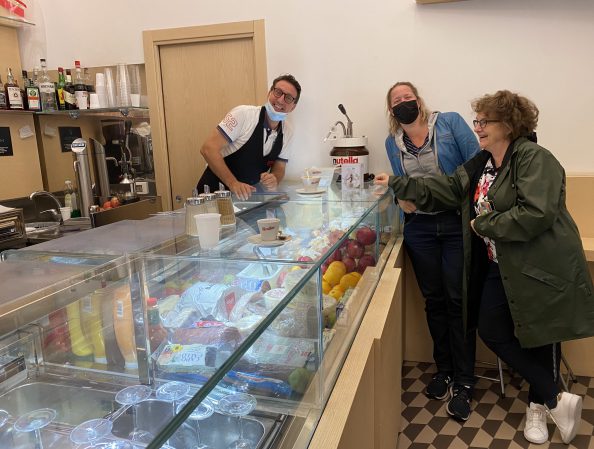 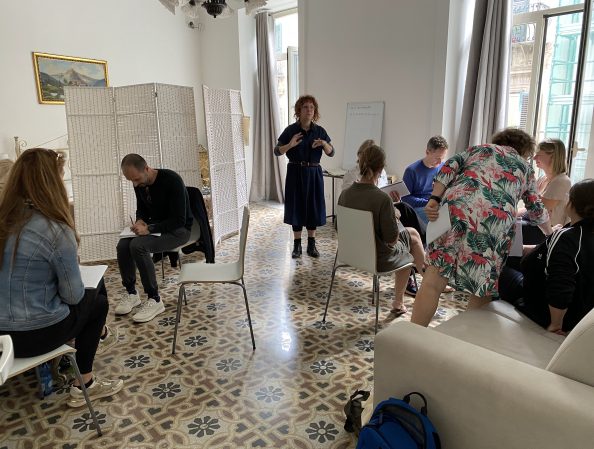 We learnt about Palermo’s famous markets: the Vucciria, where ‘I balati ra vucciria un sasciucanu mai’ (the stones of the Vucciria never get dry). During the day the streets get filled with fish sellers and at night dinner tables of osteria’s and drinkeria’s and African percussionists take over the balati (stones) – of course they never get dry! The vucciria street life was – and still is – so peculiar that even the word vucciria in Sicilian dialect also means “noise” (confusione, rumore) as well as “chaos” (disordine).

Then there is il Mercato di Ballarò in Albergheria, possibly getting its name from Arabic Suq al-Balhara (market of mirrors), or as other historical sources claim from a market that was already there 1000 years ago, selling spices from India. That’s why the Arabs called it ‘Vallarajah’. Nowadays it’s full of delicious street food, vegetables and more. 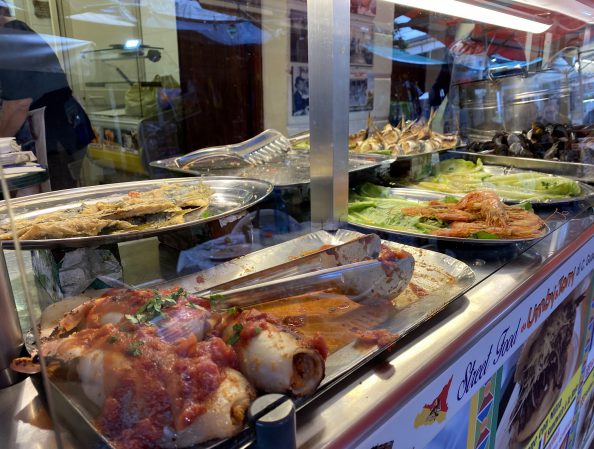 We also had a small hint of the Sicilian dialect by learning how to properly use some exclamations and expressions. We all said bedda matri! (beautiful and holy mother) when looking at something breathtakingly awesome, be it a plate of caponata (fried aubergine) or a fresco in an 18th century palace. We screamed chi camurria! (how annoying!) when it rained a little bit too much. And most importantly, we learned how to master the concept of taliata: the very, very assertive gaze that you should give to a driver in order for them to let you cross the road.

We learned how to talk about this already viaggio memorabile (memorable trip) and that divertirsi un mondo means ‘to have a lot of fun’. We watched a Palermitan Teatro dei Pupi (with Emilia!) and became actors in our own medieval spettacolo! 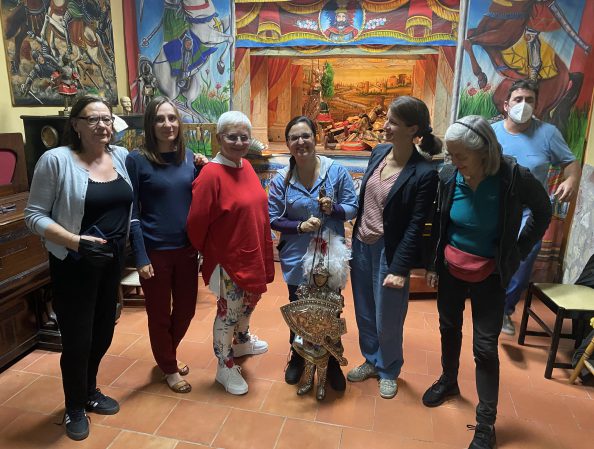 We tasted Sicilian arancine (fried balls filled with rice, or as some Dutch might say, ‘the Italian bitterbal’) in the afternoon. 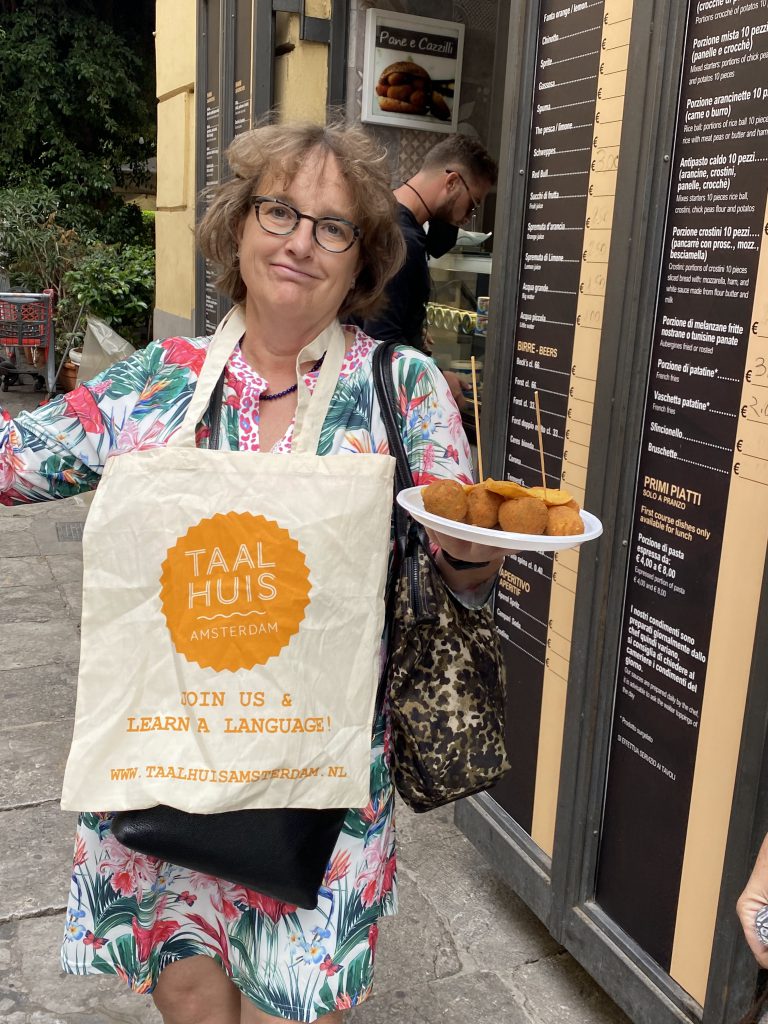 The city walks guided by Fabio in the Meschita (the Jewish area) and prisons of the inquisition were accompanied by a lot of pioggia (rain). 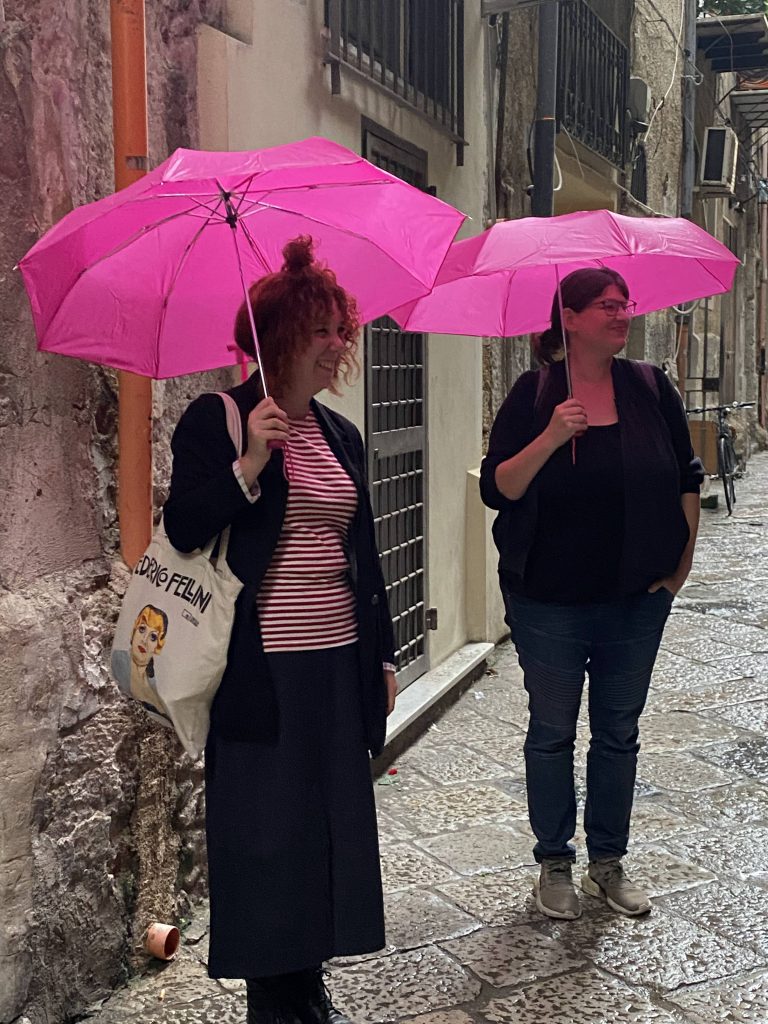 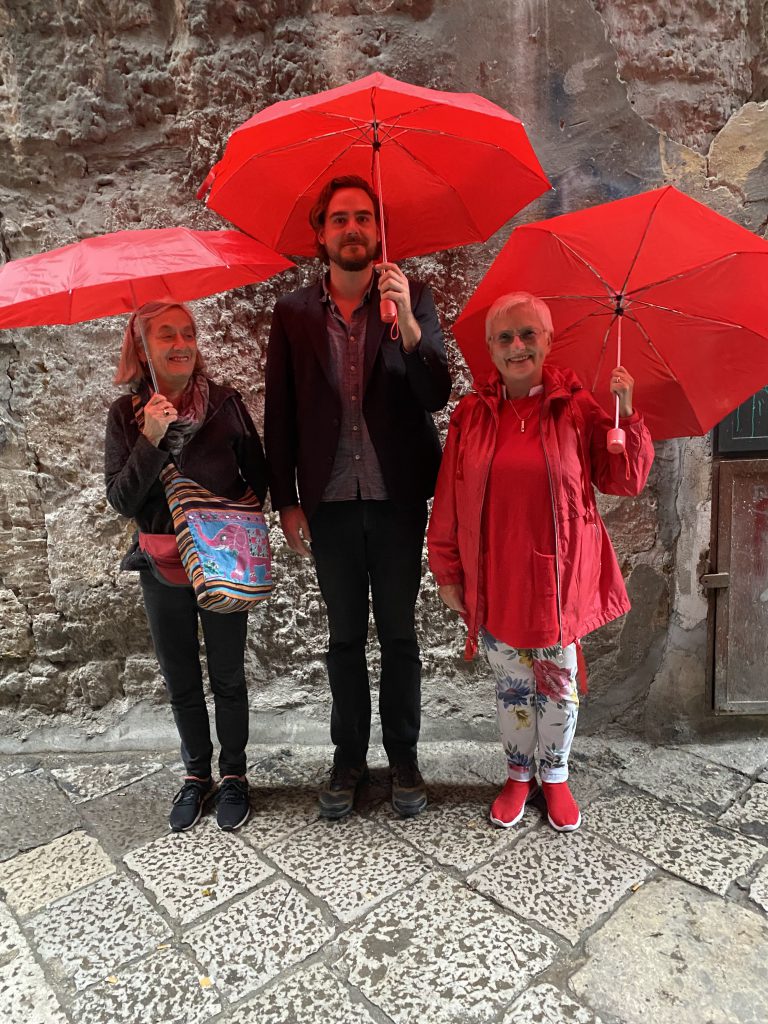 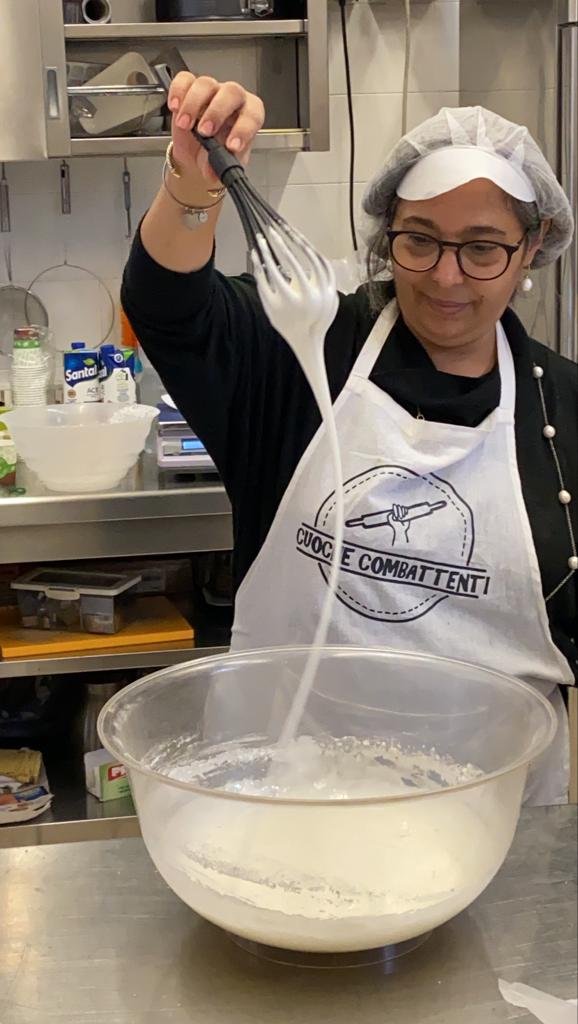 With a suitcase filled with Palermitan ceramics, painted fabric and beautiful paper, a head full of Italian vocabulary and a heart full of inspiration we returned to the Netherlands. And luckily we can always find a bit of Sicily in our own Taalhuis Amsterdam.

More from the blog.. 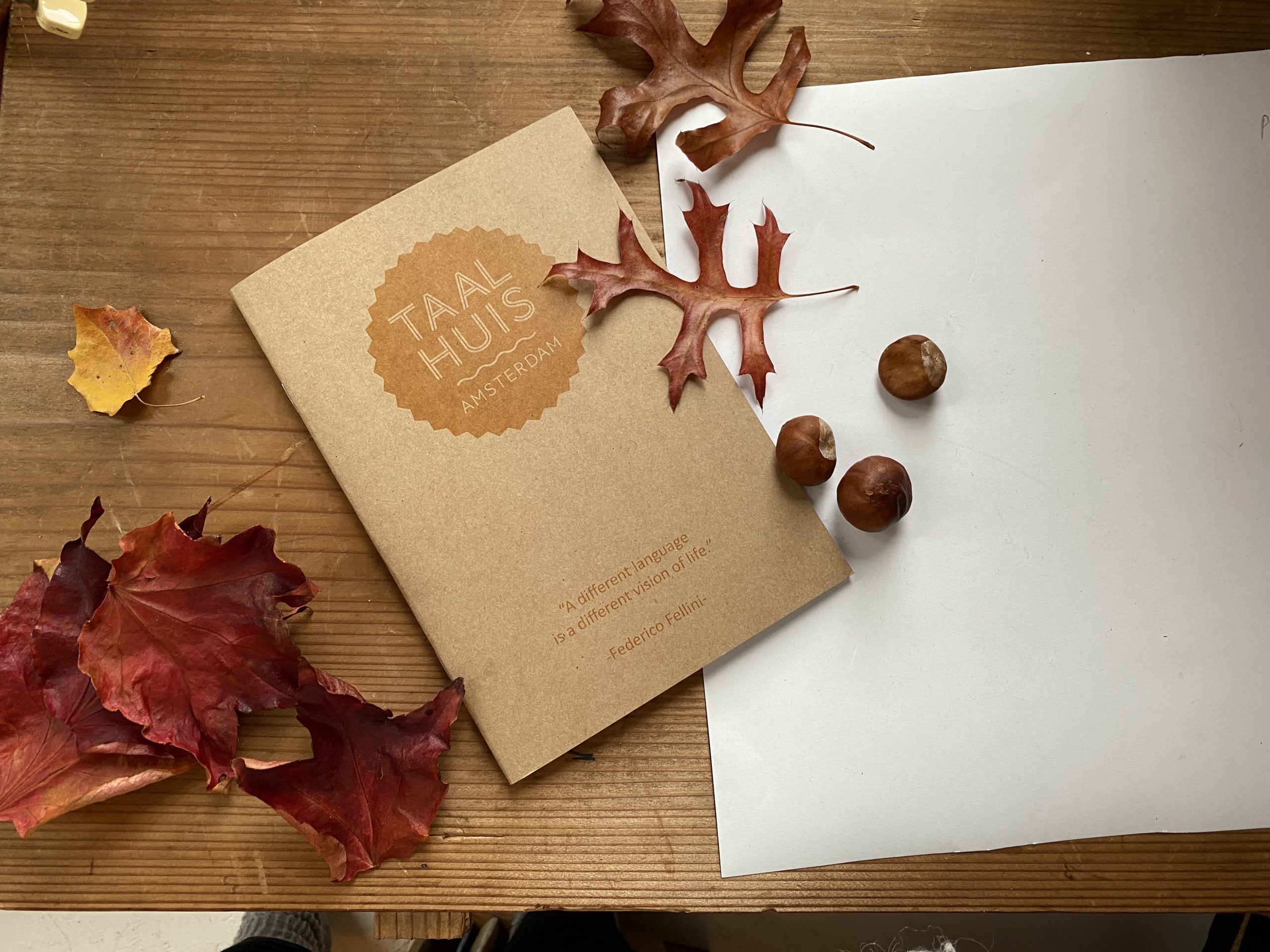