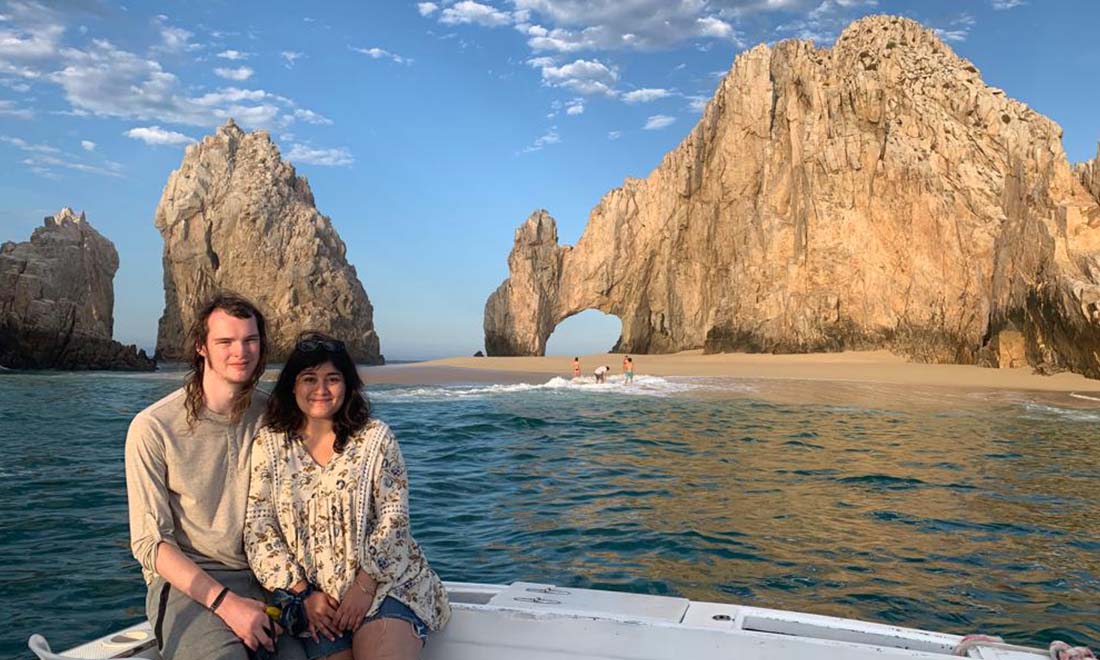 When Citlalli runs late in her online Dutch class, her teacher Janneke knows why: the Spanish class of her fiancé Thijs is probably taking a couple of minutes longer. Citlalli and Thijs are learning each other’s languages at Taalhuis Amsterdam, and his class is right before hers.

We had a chat with this Mexican-Dutch couple in light of Valentine’s Day. They told us about the way they met, funny cultural differences, and what it’s like to see your partner learning your language. “I like to hear her speaking Dutch, and I think the progress she’s making is really impressive”, Thijs says. “That’s very motivating for me as well.”

How did you meet?
Thijs: It’s quite a long story, but she was in the Netherlands for business in November 2019, and after some inconvenient circumstances – her passport was stolen on a train – she had to stay a bit longer. One day she didn’t have anything to do and there was a Feyenoord game in the evening, and she bought a ticket.
Citlalli: In the stadium I asked someone behind me to take a picture of me, and Thijs was sitting next to him. Then we started talking.
Thijs: Feyenoord played in the Europa League against Young Boys. It wasn’t a great game, but that wasn’t the most important thing.
Citlalli: Now we both have a season ticket for Feyenoord.

And now you’re learning each other’s languages. What happened?
Citlalli: After I returned to Mexico, we wanted to see each other again, so I booked a flight back to the Netherlands. I was supposed to leave in March 2020, but my flight got cancelled a week before it was scheduled, due to the pandemic. So I asked Thijs if he could come to Mexico, because our borders weren’t closed. He came for two weeks in April, and after that he spent the whole summer in Mexico. My family never speaks English, so he learned Spanish pretty fast. My dad and my grandmother don’t speak English at all.
Thijs: I didn’t really have a lot of grammar knowledge; I was just kind of faking my way through. I’m now learning more grammar at Taalhuis, and it’s quite difficult sometimes. I think I’m pretty good at grasping the meaning of words or figuring out the context, but for me grammar is harder. But well, also fun!

How did you end up at Taalhuis?
Citlalli: I signed up for a course at Taalhuis after I saw it was mentioned in a Facebook group chat for Mexicans in the Netherlands. And then Thijs joined me. I think we’re two levels apart from each other?
Thijs: I’m doing Spanish B1.4 and Citlalli follows the Dutch B1.2 course. So our levels are pretty similar, but I also think Spanish is a bit easier to learn than Dutch. Spanish is a widely spoken language, and even without making any effort to learn it you can still hear it in movies and music. But you wouldn’t hear a lot of Dutch when you’re in Mexico.
Citlalli: And in Mexico you’re forced to speak Spanish, while in the Netherlands people would switch to English pretty fast.
Thijs: At first I was following a Spanish course at the Erasmus Universiteit, but that was very different: there were a lot of students who clearly just had to do some extra curricular courses or something, and made zero effort. At Taalhuis people are very motivated to learn the language.

And now you have your classes right after each other. How is that?
Citlalli: Sometimes my laptop is not working really well, so I ask Thijs for his. Then I join him until his class is finished, and I use his account – and change the name on Zoom. Sometimes I’m a couple of minutes late in my class, but then my Dutch teacher Janneke knows why.

How is it to see your partner learning your language?
Thijs: I’m distracted pretty easily, so I follow my course in the bedroom mostly. But Citlalli sits in the living room sometimes, and then I always make sure I can hear what’s being said. I like to hear her speaking Dutch, and I think the progress she’s making is really impressive. That’s very motivating for me as well.
Citlalli: I’ve also heard them making jokes and being passionate about the differences between Mexican Spanish and Castilian Spanish.
Thijs: Sometimes I automatically use words that are more Mexican Spanish. Instead of ¿qué? I say mande for example, or instead of disculpa I say disculpe, which is a bit more formal in Spain, but more common in Mexico.
Citlalli: When my parents came to the Netherlands for the first time, Thijs was their translator. Because they couldn’t speak English together, Thijs was translating Spanish to Dutch and vice versa directly. And now our dads are best friends.
Thijs: Sometimes it was a bit difficult, especially when Citlalli wasn’t there. One day I showed both our dads around the Rotterdam port, and after that my head was hurting a lot. But it was also really rewarding: I’m learning Spanish with the purpose of being able to do things like this.

Which language do you speak when you’re together?
Citlalli: It’s very mixed, we mostly speak English but we also switch between Dutch and Spanish with some phrases and words.
Thijs: We use a lot of random words in either Dutch or Spanish. It’s weird, I can imagine it might be confusing for people around us. It’s pretty much our own language.
Citlalli: I know all the furniture words in Dutch because we moved to an unfurnished apartment and we had to buy everything new. So I usually say kast or bed or bank instead of the English words.
Thijs: We adopted a Mexican stray dog last year, Lizzie. She lives with us in the Netherlands, but since I first met her in Mexico, I automatically speak Spanish to her. A fun way to practice without being corrected, haha.

What is your favourite word in each other’s language?
Citlalli: Gezellig, for sure.
Thijs: Basically everything that doesn’t involve a double R, because I really can not pronounce that. RRRRR.

What do you think are the biggest cultural differences between Mexico and the Netherlands?
Thijs: When visiting someone, I’m used to adapting to the person I’m visiting. It’s their home and their rules. In Mexico it’s the other way around: people are very friendly towards their guests, and will offer you their bed and sleep on the couch themselves. Which is funny, but sometimes also a bit awkward – I don’t like being the centre of attention.
Citlalli: For me it’s mainly the talking on the street. In Mexico you can talk with some random gardener and you’ll know that his children are going to primary school in five minutes. In the Netherlands people are minding their own business. I think Dutch people are nice and friendly though: it might be difficult to become friends with them, but once you’re in, you’re in.
Thijs: And with business meetings, in Mexico you would first have a barbecue with some steaks and tequila.
Citlalli: The last twenty minutes are for the actual ‘business’.
Thijs: In the Netherlands it’s more like: let’s not waste time, we are here for this purpose so let’s do it and then we can all go home. Dutch people are more to the point.

How long are you going to keep learning each other’s language?
Thijs: Until we’re fluent. We would like our kids to learn Spanish, Dutch and English, so we also have to understand them ourselves of course.
Citlalli: We’re getting married at the end of the year by the way. We’ll have one wedding in the Netherlands and one in Mexico.

Congratulations, and thank you for sharing your story with us!