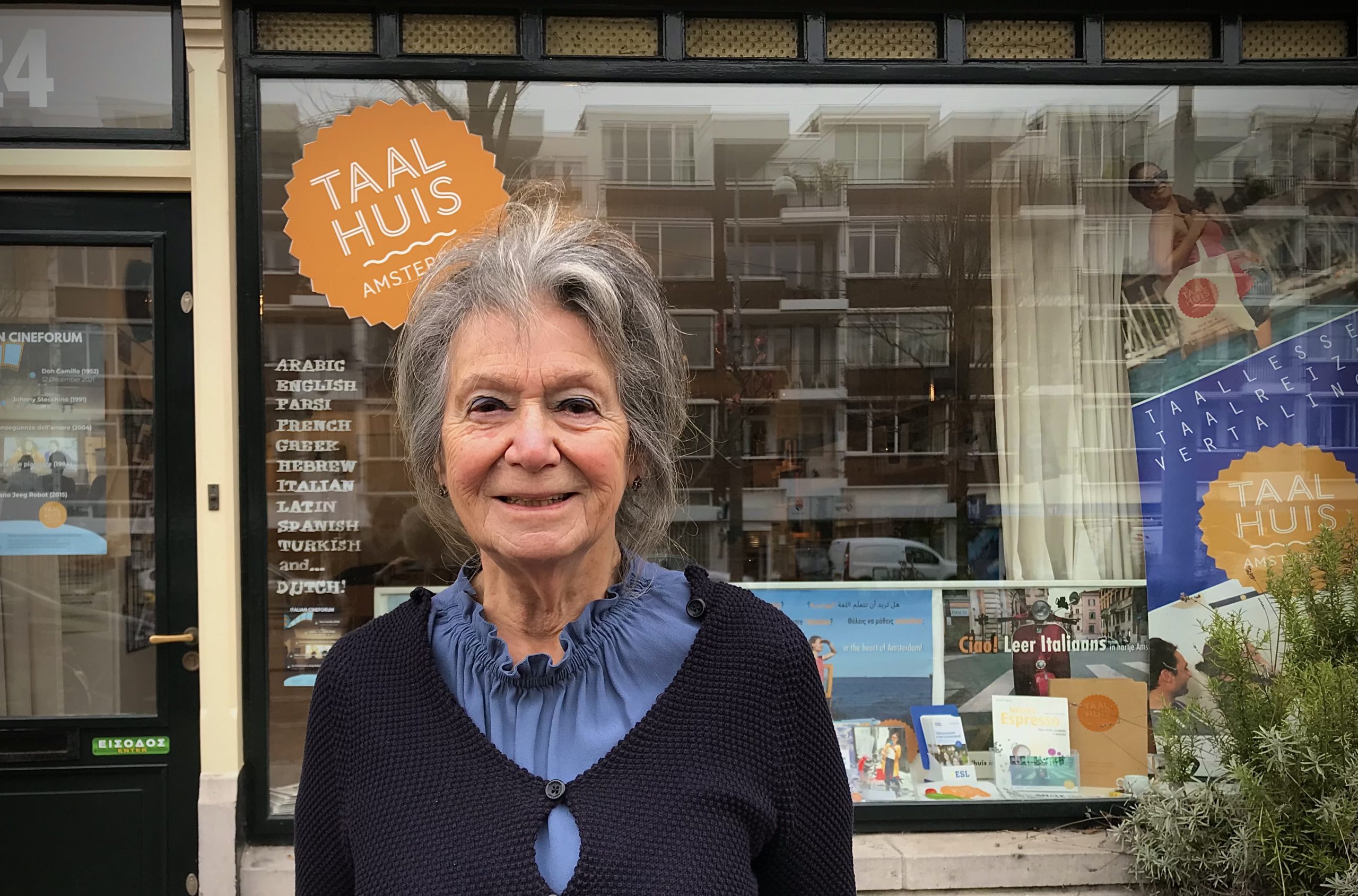 Meet our student Kathie Somerwil: ‘For me, learning Latin is intellectual play’

Every Monday evening, private student Kathie Somerwil logs into her computer for another online class full of Latin texts and grammar. And that’s just the tip of her linguistic iceberg: born as an English native speaker, Kathie also learned French, Dutch, German and Russian, and apart from Latin, she has also studied Ancient Greek up until a year ago. Not to mention her future plans!

For our Meet our Students series, we spoke to her about learning Latin, her academic career and the perks of online classes.

How did you end up learning all these languages?
I was born in London, and we moved to New York when I was nine. Seven years later, when the war was over, we moved to French-Switzerland, where I learned French. A couple of years later I met a Dutchman, who would become my husband. We started a family in the Netherlands, and I learned Dutch – my third language.

Years later I went to the conservatory in Vienna – I play cello – and learned German, and then I started studying Slavistics at the University of Amsterdam, with German as my second major. There I obtained my PhD on Dostoevsky. My premise was that all his work had its roots in his first novel, Poor Folk.

And now you’re also studying Latin. How come?
After my PhD I completed a master’s in military history in Liverpool, and I started reading Caesar in Latin. I always liked Latin back at school. My ex-professor introduced me to Diederik Burgersdijk, who would become my private Latin tutor every other week and we read all Caesar wrote about his own wars. That suits me better than a contemplative author, like Tacitus. When Diederik started with Tacitus it was way over my head, as I don’t have a philosophical brain. I did enjoy Tacitus’ writings about Germanicus though, who took revenge after the Roman army was killed in 9 AD. It had to do with military history and this famous author makes fascinating reading.

I alternated the Latin lessons with Ancient Greek, which I enjoyed immensely but found extremely difficult. So a year ago, I alas had to stop, because never having learned even the Greek alphabet until then, that was very challenging. At my advanced age, it alas became too much.

Because of the alphabet?
Oh, it wasn’t the alphabet, you can learn the alphabet in two weeks. Everyone sees it as a huge thing, but it’s nothing really. It’s the verbs that make it challenging.

How did you end up at Taalhuis Amsterdam?
I attended some of the lectures Diederik moderated for the About Ancient Languages series. And I wanted to continue learning Latin, which is a lot more accessible than Ancient Greek. So when I saw that Taalhuis was offering Latin courses, I decided to register. It was a group course, but after a while the other students of my group didn’t continue, so now I’m the only one left with my level – and I have private lessons after all. My teacher is Aron Ouwerkerk and he’s excellent. Very erudite, and a gifted educator.

What do your lessons look like?
We’re reading Erasmus’ Colloquies and Roma Eterna, and about the early Christian martyrs, among other things. I have never been to Rome, but he brings Rome to me. I’m discovering Rome in my own living room! I love it so much. I have nothing but praise for Aron. He also tried to get me into poetry, but unfortunately for Aron I am not someone who reads poetry. A big disappointment for him, but luckily he has come to accept it.

I think many people would find it admirable that you’re learning Latin at your age [Kathie is almost 92].
I feel very privileged that I can do this, it’s the solution to getting older. It gives me a kind of stability, with lessons every Monday. Latin grammar is my brain gymnastics. I have never done a crossword puzzle or a sudoku, that isn’t something for me. But I can do Latin grammar.

Your lessons are online. Do you like that?
Online courses are ideal for elderly people. But really! I don’t have to go to school late in the evening, or climb the stairs. There’s nothing wrong with lessons on location of course, but for me personally it is a big bonus to follow a course online.

I can imagine not everyone wants to learn using Zoom after a certain age.
Wanting something is different from having to do something. First you must do it, and then the wanting comes naturally.

When I was 70 or so, I wanted to get involved with the university again, and my youngest son said: “Mama, if you don’t buy a computer, nobody will take you seriously there.” So then I bought a computer. It didn’t happen by itself, and I couldn’t handle it well right away, but I had to learn it. You were born and raised with computers of course, my three-year-old great-granddaughter even has a kind of computer. It’s not something my generation is used to, but you get so much in return! Maybe it isn’t something for everyone, but if you don’t keep up with modern times you would miss out on so much. For me this window on the world is a great bonus.

You have learned many languages. What do you like about learning languages?
My first four languages were more like a coincidence, and it’s not that difficult to learn them when you’re young. Russian is the only language I had to learn while not living in the country itself. And that was hard, so I admire people who do this with several languages. But Latin and Greek have just been to educate myself more in depth. It’s not that I have to do it; it’s intellectual play. This summer I’m also going to Norway, where I hope to take conversation lessons in Norwegian too.

Really? Tell me more.
I met this lady often at the About Ancient Languages series, we sat next to each other and became good friends. As she had studied Ancient English with a minor in Norwegian, we thought about practicing some Norwegian together – I once did Swedish for one year, which is quite similar.

Norwegian is not that hard if one has learned English, German and especially Dutch, so I look forward to my summer in Bergen and hope to find someone to teach me some basics for an hour a day, so I can order a cup of coffee. I always want to have something to do.